Tiled lighting techniques have gained significant interest in recent years. However, a problem with tiled lighting techniques vs. traditional directx 9 styled deferred lighting (additive alpha blending) is the significant amount of false positives largely due to intersection testing using coarse bounding volumes. This is particularly relevant when supporting lights/volumes of different shapes such as long narrow spot lights, wedges, capsules etc. The downside to directx 9 style lighting is this approach does not work with forward lighting and having thousands of lights is extremely expensive due to setup cost per light and overlapping reads from gbuffer and overlapping writes to the frame buffer.

During the development of Rise of the Tomb Raider (ROTR) we came up with a new tiled lighting variant which we named Fine Pruned Tiled Lighting (FPTL) which we describe in GPU Pro 7.  There are many details to the full implementation discussed in the article and I will not go over them here but the main point is the cost of fine pruning can easily be absorbed by using asyncronous compute. This implies we obtain a light list with a very minimal amount of false positives almost for free.

As explained in the article the technique will work with essentially any methodology such as deferred shading, pre-pass deferred, tiled forward and even hybrids between these. A demo sample is available though it was written in vanilla directx 11 which implies the asyncronous compute part is left as an exercise for the reader! The demo shows a single terrain mesh lit by 1024 lights (heat map and fine pruning enabled by default). For simplicity the demo is setup as tiled forward though on ROTR we used a hybrid where we supported pre-pass deferred, tiled forward and conventional forward.

When running the demo you will notice fine pruning enabled runs faster than disabled despite the fact that there is no asyncronous compute in the demo (since it is standard DX11). However, the improvement on speed is of course much more significant when asyncronous compute is used correctly.

Other interesting aspects to the implementation is we determine screen-space AABBs around each light (regardless of type of shape) on the GPU. This allows us to reduce coverage significantly for partially visible lights (accellerates fine pruning) and reduces pressure on registers during light list generation (explained in the article). Additionally, we keep light lists sorted by type of shape to miminize chances of thread divergence during tiled forward lighting.


Since I wrote this post I've written a new technical paper called "Surface Gradient Based Bump Mapping Framework" which does a better and more complete job describing the following.
All my papers can be found at https://mmikkelsen3d.blogspot.com/p/3d-graphics-papers.html


I know it has been a while but I thought I would like to emphasize an easily missed contribution in my paper Bump Mapping Unparametrized Surfaces on the GPU. The new surface gradient based formulation (eq. 4) of Jim Blinn's perturbed normal unifies conventional bump mapping and bump mapping from height maps defined on a volume. In other words you do not have to bake such heights to a 2D texture first to generate
Jim Blinn's perturbed normal. The formula also suggests that a well known method proposed by Ken Perlin is wrong. For a more direct visual confirmation a difference is shown in figure 2. The black spots on the left are caused by subtracting the volume gradient which causes the normal to implode. The result on the right is when using the new surface gradient based formulation and as you see the errors are gone.

To give an example of how the theoretical math might apply to a real world practical case
let us take a look at triplanar projection. In this case we have a parallel projection
along each axis and we use a derivative/normal map for each projection.

The corresponding two channel derivative maps are represented as (dH_x/ds, dH_x/dt) and similar for the other two height maps. Using the blend weights described on page 64 in the presentation by Nvidia on triplanar projections, let us call them w0-w2, the mixed height function defined on a volume can now be given as

The goal is to use equations 2 and 4 on it to get the perturbed normal.
However, notice the blend weights w0, w1 and w2. These are not really constant.
They depend on the initial surface normal. In my paper I mention that the height map
defined on a volume does not have to be global. It can be a local extension on an open
subset of R^3. What that means (roughly) is at every given point we just need to know some local height map function defined on an arbitrarily small volume which contains the point.

At every given point we can assume the initial normal is nearly constant within some small neighborhood. This is the already applied approximation by Jim Blinn himself.
Constant "enough" at least that its contributions, as a varying function, to the gradient
of H will be negligible. In other words in the local height map we treat w0, w1 and w2 as constants.


Now that we have the gradient this can be used in equation 2 and subsequently equation 4. Another way to describe it is to use this gradient with Listing 3 in the paper.

The derivation in this post is according to OpenGL conventions. In other words assuming a right hand coordinate system and Y is up. Furthermore, using lower left corner as texture space origin. Let me know if you need help reordering things to D3D.

Links to my papers and some Summaries

My homepage with links to my papers
Posted by Morten S. Mikkelsen at 12:02 PM 12 comments: 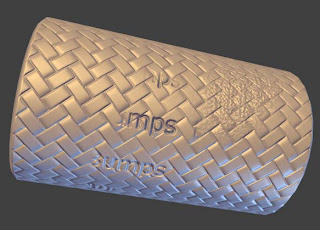 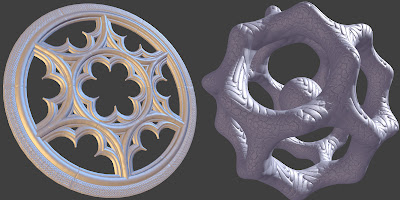 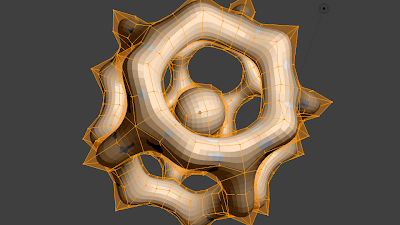